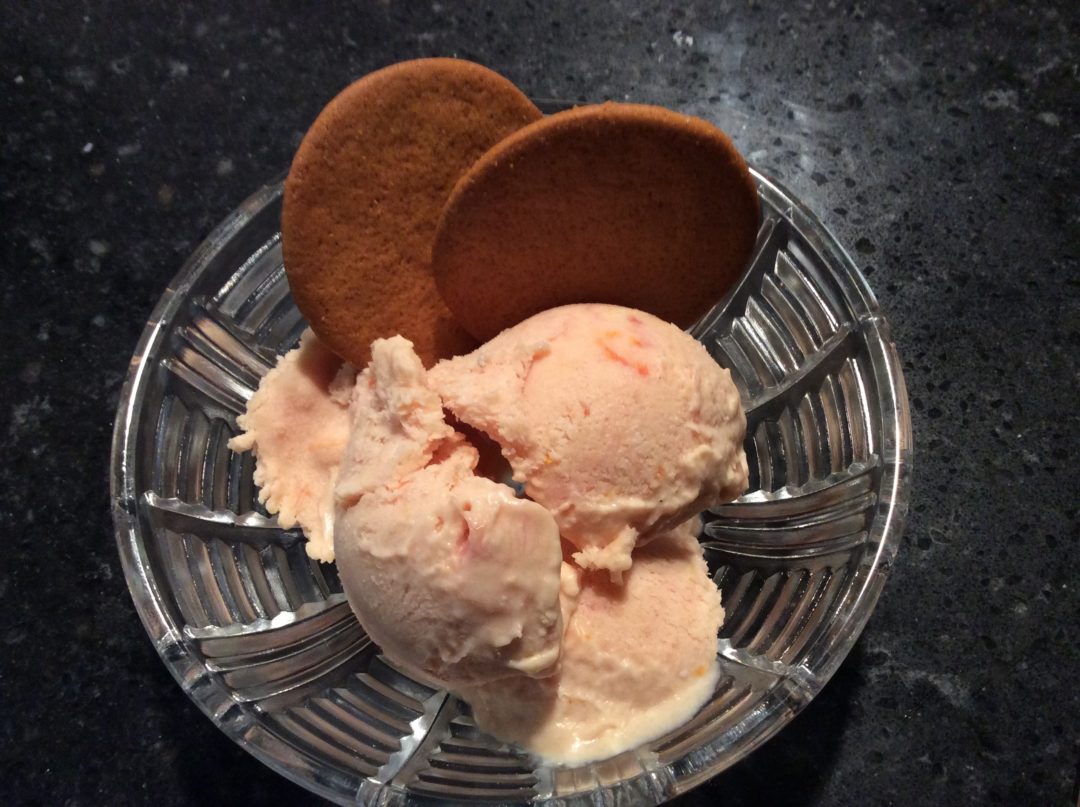 I am a big fan of ricotta cheese; it is endlessly versatile but it is very easy to be fobbed off with inferior products. Because it is made from the whey left from cheese making, industrial producers of cheese in this country have cottoned onto the fact that they can make yet another insipid tasteless product from what was previously waste. Blame the industrialisation of the dairy industry in this country which apart from producing tasteless milk, condemns thousands of cattle to unspeakable lives. I can feel a separate post coming on about that.

A good, Italian-style ricotta can be difficult to find in the UK and I’m afraid I have been nagging farmdrop.com to source and supply a really good ricotta. it was therefore with huge pleasure that last week, I was able to order westcombedairy.com Ricotta which was a lovely cheese that I wanted to use for something that I perhaps wouldn’t otherwise have made. Fortuitously, I also had rhubarb and blood oranges, both of which I love. So, rather to my surprise, as I lack the gene for sweet foods (well, not completely but I’d rather have cheese than chocolate), I decided to make ice cream.

Now, before you are up in arms that the following recipe isn’t really ice cream because it’s not made with eggs and cream, yes, I know. But Larousse tells me that ice creams are “cold desserts made by freezing a flavoured mixture”. The use of milk, cream and eggs seems to have started around 1775, although it is said that in about 1650, the cook of Charles I of England had created the egg & cream recipe but the King had paid him to keep the recipe secret. So, I am unrepentant in calling this an ice cream (it does include cream, after all!). I also think that if I start to call it “frozen rhubarb dessert”, it sounds like something full of E numbers that is found at the bottom of a supermarket freezer on double discount because nobody fancies it. And who would, when they can have Rhubarb, Ricotta and Blood Orange Ice Cream!

On a slightly different topic, this recipe has been welcomed by a friend with a daughter who is severely allergic to eggs and who frequently misses out on the pleasure of ice cream.

Can I also mention here that I don’t own an ice cream maker and am not sure I want one (although I think Edoardo thinks he might get ice cream more often if I did). In truth, the end product could probably have been smoother if I had remembered to mash it up more frequently during the freezing process. I did set the alarm on my phone but only managed two mashes. Three might have made it smoother but the flavour is still delightful with just two mashes.

Put the rhubarb, sugar, orange juice and zest in a pan and simmer until the rhubarb has collapsed into a puree

Set aside to cool

After that time, mash up the mixture to reduce the size of the ice crystals and return to the freezer

I served this with Nyakers Pepperkankor Swedish ginger biscuits and in fact, now that blood oranges are over, I might make ricotta, rhubarb and ginger ice cream…